Alexander Herrmann, the perfect steak from bison, a surprisingly delicious Canada and a Hammer recipe for Ice Cider Sabayon 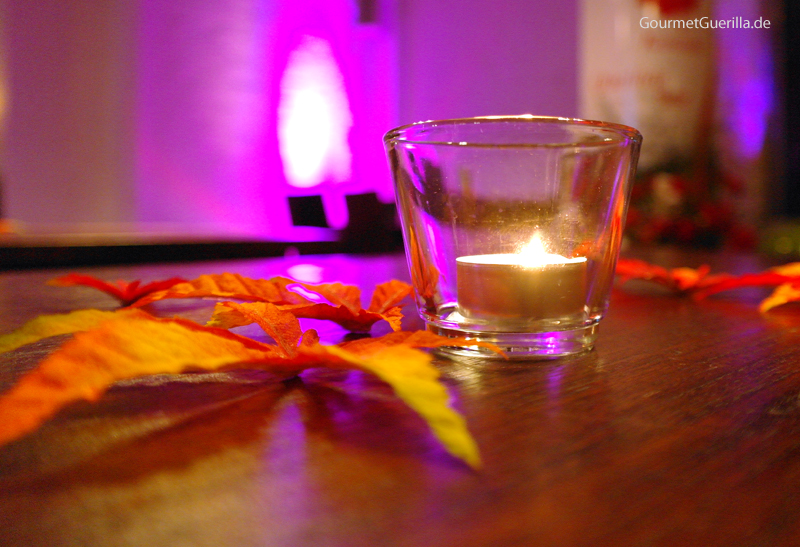 "Man, good that you're there!" shouts the tall man with the short hairstyle and comes along rushed arms rushed towards me. I can just register that it is the media presence chef Alexander Herrmann - then I disappear in his embrace. Reflexively, I return the warm pressure. "Yeah yeah, I'm glad that I'm here, too," I mumble in his shoulder, startled, and see five amused faces out of the corner of my eye. "Well then come right up here to the bar, I'll show you how to roast a meat perfectly," says Alexander cleansed as he releases me from the cover of his gray chef's jacket.

Us are in the StarKüche in Hamburg Bahrenfeld. The Consulate of Canada has invited to the cooking evening, for which Alexander Herrmann has created a special menu - of course - Canadian products and wines. Since I get a glass of white wine and feel suddenly good - as always, if a stove or a kitchen or a glass of white wine in my area. I am quite surprised to find myself in a small, cozy show kitchen in a rather small circle of guests: Frank Niggemeier, editor-in-chief of Hamburger Morgenpost, Bruntje Thielke, editors of eat smarter, Bianca of elbcuisine, the Trade Representative of the Canadian Embassy and of course the ambassador himself is standing in front of the counter and watching the cooking. We are looked after by the very likable Dijana of Ogilvy. Very intimate, the whole thing. 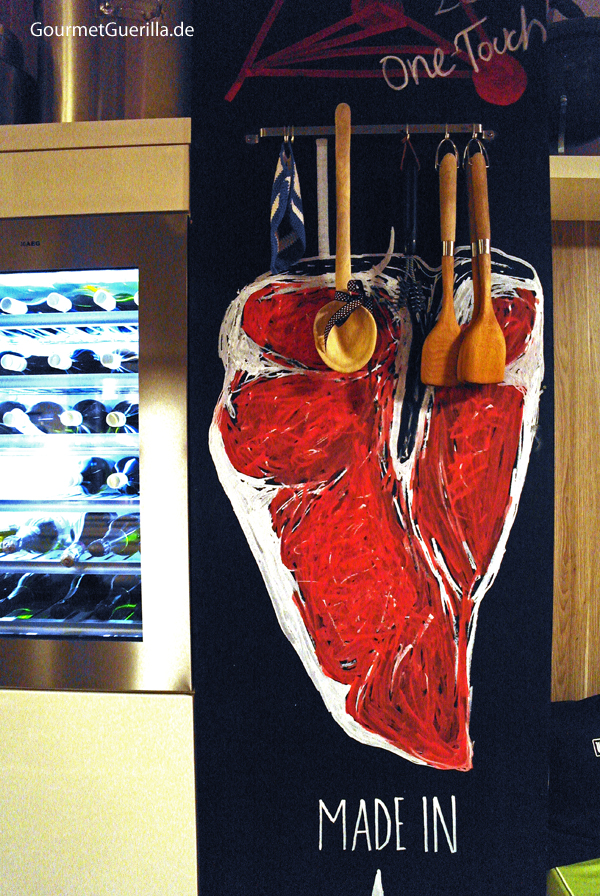 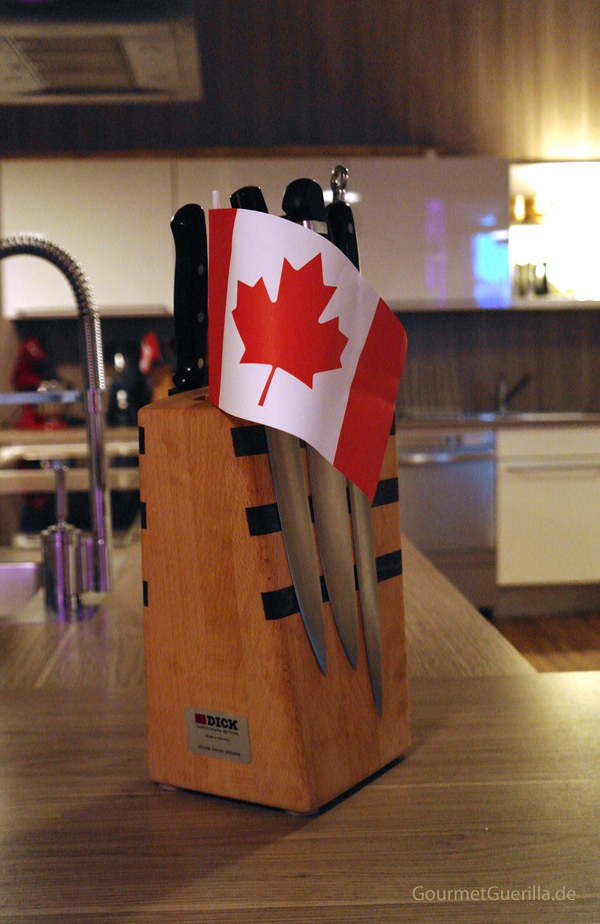 As I sip my glass, Alexander Herrmann fishes for a pan and grabs the olive oil bottle. He explains that - contrary to most tips - olive oil is perfectly suitable for roasting meat. Meat is often fried too hot in butter lard and co. it smokes and splatters and stinks and the meat is already dark brown on the outside, while it is still too raw inside. In addition, the very hot roast destroys the protein and deprives the meat of water - it is boring and tough. The frying temperature of 130 ° C, however, is optimal for a wonderfully juicy, perfectly cooked steak. When the olive oil starts to smoke quite easily, the steak is put into the pan. It sizzles gently and quietly to itself. Sautéed from all sides, it then comes at 100 ° C for 20-30 minutes in the oven. Just before serving, Alexander foams a good chunk of butter in a pan, flavored with cinnamon and fresh orange peel and leaves the steak in the pan for 2-3 minutes. He regularly pours the meat over the sizzling butter. Then it is cut open. It smells divine. 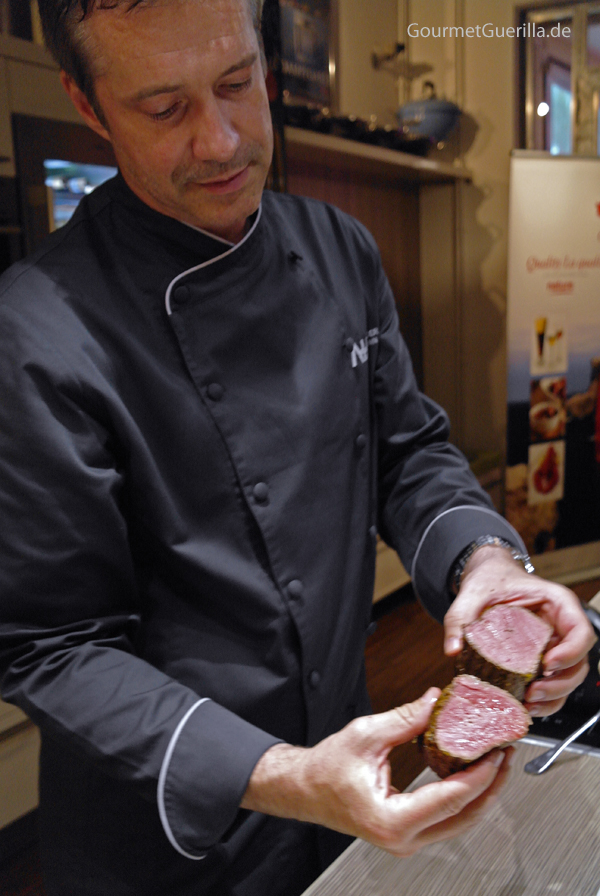 The result we have a few minutes later on the plate: wonderfully fried Canadian bison fillet, very tender and with an exciting touch of cinnamon and orange. The lentil salad and cranberry mustard chutney are stunning. 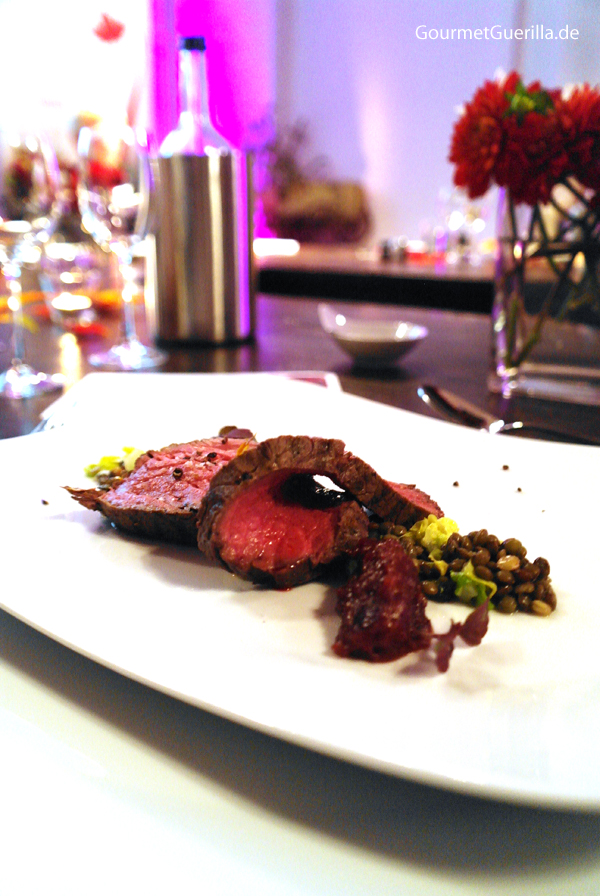 I indulge in the perfect flesh and have a great time talking to my neighbor about the district town in the Ruhr area, where we both grew up by chance. And about Canada.

I find that my basic knowledge of the second largest country in the world is terribly limited.In addition, Canada cultivates the bison herds, which were already close to extinction. The fact that the meat is very low-fat and tasty makes it just as attractive as the fact that the herds graze freely on huge areas. Maple syrup and cranberries I just could have listed as typical Canadian. But at the latest with wines I would have been skeptical - completely wrong. Particularly delightful is the red ice wine, which brings to its very exciting taste of fruits and nuts a sparkling, amber color. A blast for dessert. 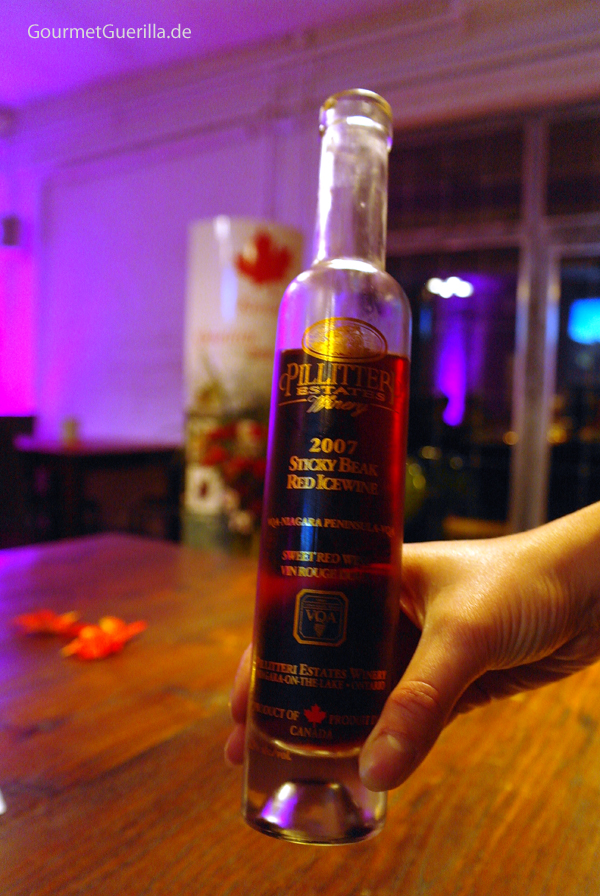 But before we do that actually go for dessert, I can still quickly taste the scallops glazed with chili and Arhornsirup of chickpea salad. Although I'm not a fan of shellfish and seafood, the scallops are really tasty. No trace of marine or fish flavor - but a very light smoky flavor. Non, nom. The chickpeas are cooked, but still quite defined and firm. somehow it pays well to buy these things not always cooked in cans ... * Thoughts note *. 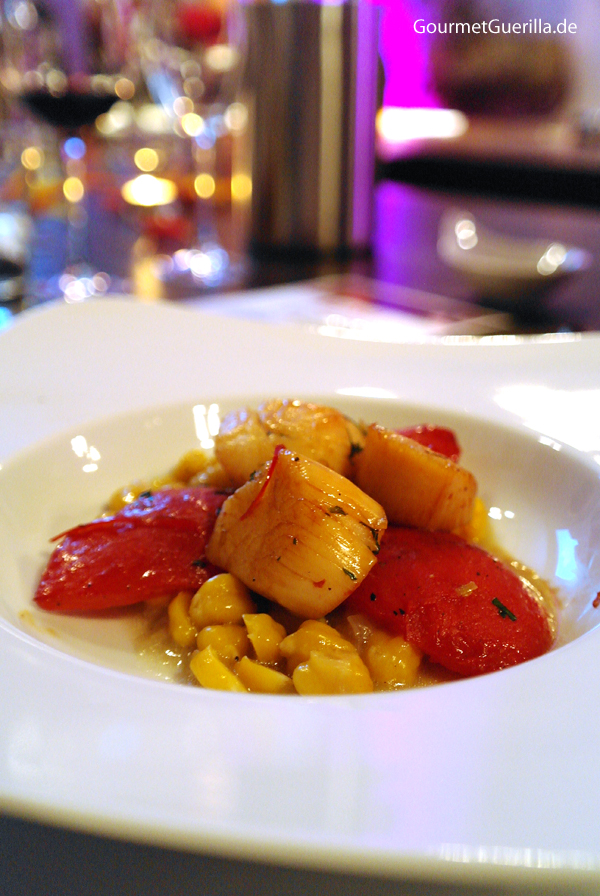 The boss stands on self-portraits and grabs my camera between the aisles. In the third picture we are both pretty well hit. What this is under my right eye, though ... I strongly disagree that these could be signs of skin aging. 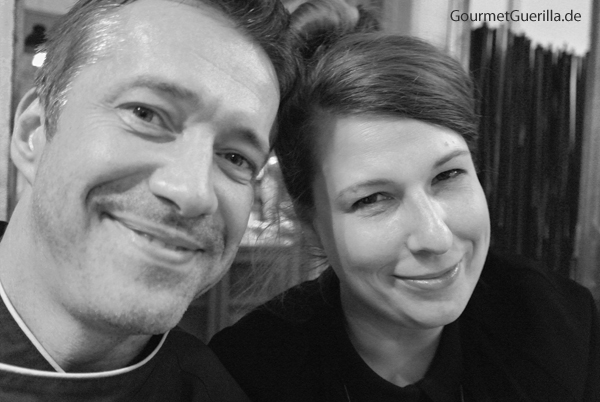 Then we gather around the counter again and Alexander Herrmann fishes for the next pan. He heats water and adds powdered sugar - for the dessert we want to cover walnuts with white caramel. 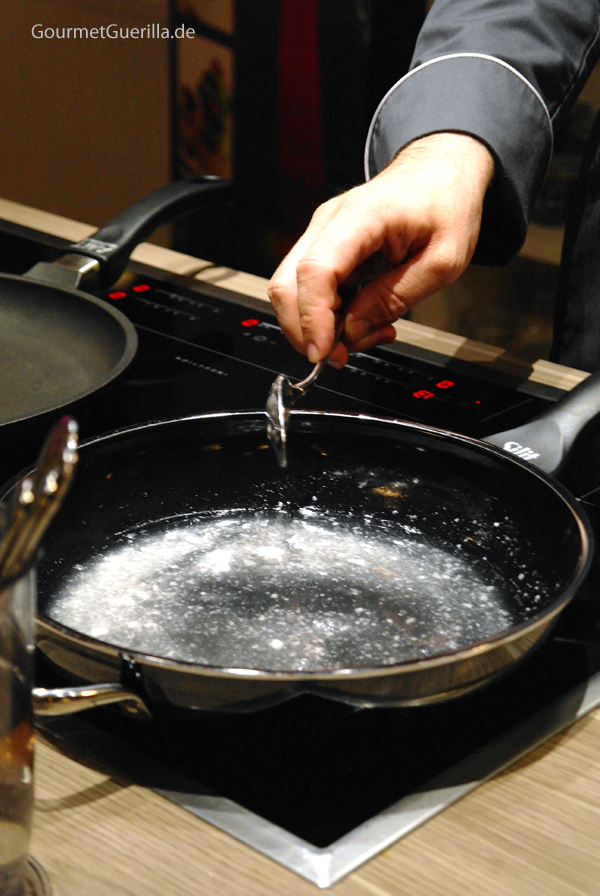 As Water and powdered sugar are cooked to a syrup, the walnuts come into the pan. Then it means stir, stir, stir ... and humorous guerrilla tips are still on top (yes, and next time I think so synonymous guaranteed NOT to shoot upright): 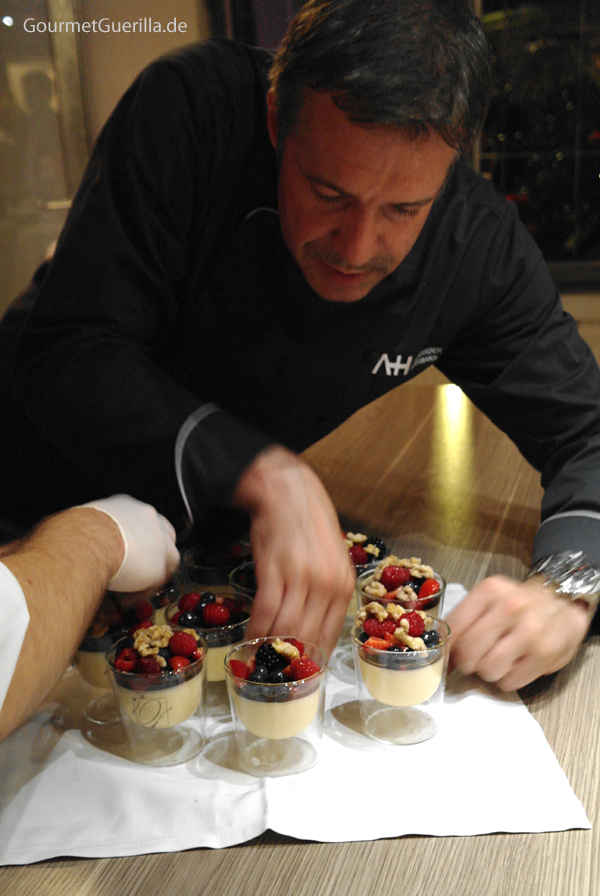 This is what the finished dessert looks like: Ice Cider Sabayon with caramelized walnuts and syrup berries. Hach! 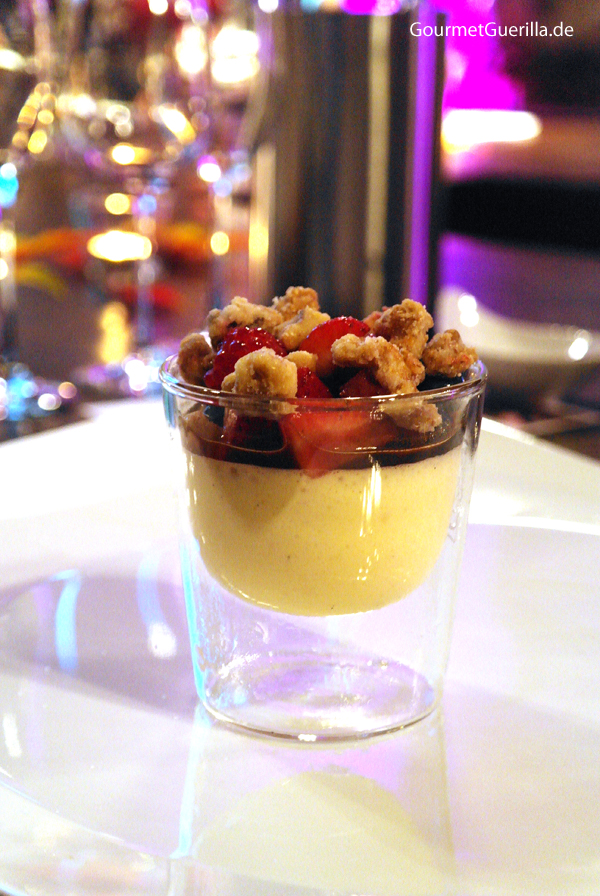 Put the icing sugar in a small saucepan, add 50 ml of water and bring to a boil. Now add the walnut kernels and, while stirring constantly, allow the water to boil until completely evaporated, d. h., Until the walnut kernels are coated with the powdered sugar. Immediately place on a baking tray and allow to cool at room temperature for 30 minutes. Then cut the walnut kernels into chunks with a knife. For the iced Sabayon beat the creamy creamy. Place the egg yolk, sugar, ice cider and the pith of the vanilla pod in a small bowl.Then remove the foamy Sabayon from the steam and continue beating until it has cooled to room temperature. Carefully fold in the creamy whipped cream.

Take two shallow bowls or decorative jars and add the sabayon. Then sprinkle the chopped walnut kernels over and freeze in the freezer for at least 3 hours. Clean various berries, if necessary remove the green and quarter the berries (eg strawberries). Mix the berries with the maple syrup and cinnamon in a bowl. Cover the bowl with cling film and leave the berries in the refrigerator for at least 2 hours or marinate.

To serve, remove the iced trays or jars from the freezer and add the marinated berries and maple syrup liquid. Immediately serve and enjoy.

For more information on products from Canada and many delicious recipes, there are the way to so-schmeckt-kanada.de 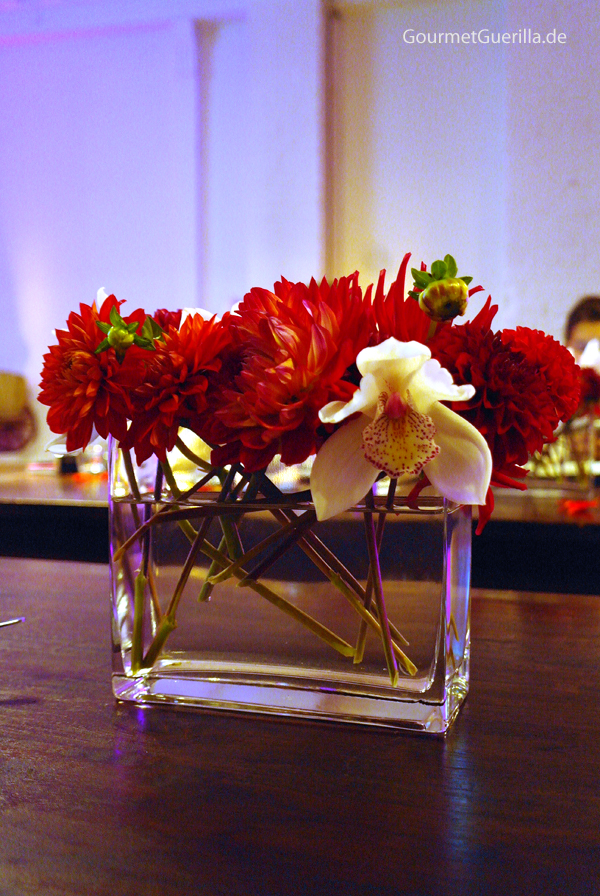 Many thanks to the Embassy of Canada for the invitation, Alexander Herrmann for his entertainer qualities and tips, Ogilvy for the great organization and the star kitchen for the hosting. I could do it again.